It is essential that investors know exactly what they own when purchasing real estate. For instance, if investors are considering the purchase of a property with McDonald's as the tenant, are they buying both the land and the building, just the ground under the building, or only limited rights to the building without ownership of the land underneath? Each type of ownership provides significantly different rights, returns, tax benefits, and risks. Therefore, it is important to be able to identify the different types of ownership and know the benefits and drawbacks of each.

Fee simple ownership gives the owner the title and rights to the land and any improvements on the land. In the case of the McDonald's example, the owner would own the land, the building tenanted by McDonald's, and any other permanent structures located on the property. The owner would have the choice to renew the restaurant's lease when it came due and would have authority to make any other property- related decisions. From a tax standpoint, the owner could utilize depreciation to shelter rental income based on the value of all of the improvements on the land. The land could not be depreciated.

In the case of leased fee ownership, the land owner owns the title and rights to the land, but use of the land and any improvements on the land is leased to another party for a specified period of time. This leasehold interest structure is referred to as a "ground lease" and typically lasts in excess of 40-50 years. This type of ownership is regarded as the most secure form of real estate ownership because the land owner generally does not retain any liability in the operations of any of the improvements. Moreover, upon any event of uncured default of the lessee or upon the end of the ground lease term, all of the improvements and the use rights thereof revert back to the land owner. 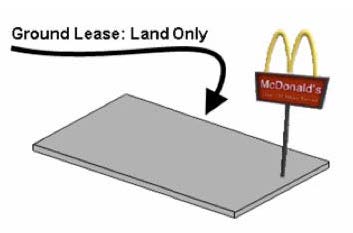 According to the IRS, leasehold or ground lease interests must have terms that are 30 years or more in length (including available renewal options) in order to qualify for a 1031 exchange purchase. It is advisable to keep this in mind not only for the original purchase but also for the next purchaser down the line. If a 1031 exchanger buys a property with only 30 years remaining on its ground lease, it may qualify for its own 1031 exchange, but by the time the exchanger looks to resell the property, it would not qualify for another purchaser's 1031 exchange. This would reduce the number of potential buyers and demand for the property and likely hurt one's ability to recoup the original investment.

Despite the tax benefits and higher income that can be associated with improvement ownership on a ground lease, we tend to avoid this form of ownership. Unless the ground lease term is in excess of 50 years and in areas of the country where excess demand and limited supply of land have required states to step in and offer ground lease ownership to promote business growth (such as Hawaii, New York, and parts of Florida), improvement-only leasehold interest ownership poses significantly more risk to the owner, as the underlying ground lease may not be renewed at the end of the term. That being said, we primarily advise investors to target leased fee and fee simple ownership, as we believe that these types of ownership offer more secure forms of real estate ownership and a better long-term ability to maintain property value. If investors require tax shelter on their income, fee simple property ownership provides both depreciation and greater ownership security.